I joined my first startup in the summer of 2000. Not a good year for tech, but nevertheless a highly ambitious and inspirational group called NST. NST, or Nordic Speech Technology, was developing next generation speech recognition software and human-machine interaction via speech. Today, most know this as Siri.

At the time, this was truly groundbreaking stuff.

I got hired – while still running through school – to “be a business analyst”.  To NST, that meant work on strategy analysis and business planning. My job was something like;

Still today, a pretty cool job by itself. Only difference. Today I have very different tools and I would do the job radically different. Radically.

On the very first day of the job, this was early June 2000, I was shown my office. Turns out, I would be sharing with two slightly older guys, just about to finish their Master’s degree in industrial economics. As I introduced myself and we got talking, I explained the job ahead of me.

– “oh, cool”, one of the Industrial economics guys, cried out.
What he said next has stuck with me ever since.
– “Which strategy tool will you be using? Porter’s, Pestel or SWOT?”

My reply at the time, “I haven’t decided yet’’.

The honest answer, however, was I had no idea. None.
At the time, I hadn’t done a single class on strategy. I hadn’t learned a single one of these tools, or any other for that matter. I was just coming off my first year bachelor studies in business & marketing, and all the strategy stuff would be in the third year.

But, with unlimited confidence in my own ability, I figured, how hard can it be?

So, I sat down, opened Google.com and typed “Strategy”.

The following weeks were spent digging into the available strategy literature available online some 13 years ago. I learned tons. The SWOT grew as my insight deepened. The PESTEL got more and more detailed. Porter’s Five Forces analysis revealed  the overly reliance of a single software supplier, should that company fold, NST would be left without their core technology platform; which of course happened a few years later.

But, all through this, a growing band among us, agreed that we needed “…something else”. Building a company like NST, with 250 highly skilled professionals, should be like building a true knowledge-driven company. Nestled among the Norwegian mountains at Voss (primarily a ski and extreme sports resort), NST management had managed to attract Professors of linguistics, highly advanced IT programmers from large European cities and of course, a number of IT programmers from Norwegian Universities. A hi-tech hub in the middle of a mountain village.

But the tools and the fundamental ideas behind the company were not. We were still left with industrial management principles and strategy tools made for large, established companies. As a Norwegian tech-startup, we were groping in the dark.

Later that summer, we came across two books. First, Ole Udsholt, brought back Lars Kolind’s book, “Vidensamfundet” (the knowledge society). A bit later we came across Christensen’s “The Innovator’s Dillemma”. Combined, these two books sparked a very different discussion with Ole, Thomas Bilgram and others at NST. These two works held fundamentally different ideas for a company like NST.

A few years later, the company ran out of funds and shut down, after having blown through some$50 million dollar. But the technology worked fine… 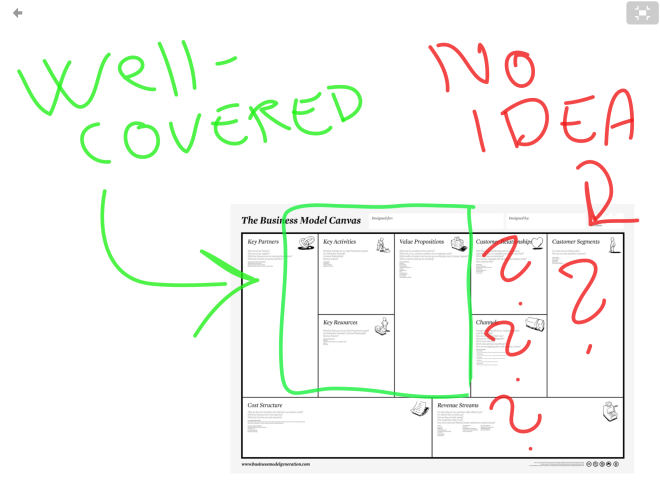 Looking back, it’s easy to blame a number of reasons for the demise of NST. But one thing is clear. The board, the management, the business development team and me as a “business analyst”, we did not have the right tools for the job. We were trying to build a hi-tech startup using the wrong mind-set and the wrong tools.

Today we celebrate, yes, celebrate, the May issue of the Harvard Business Review. It’s dedicated to Entrepreneurship. Steve Blank’s “Why the lean startup changes everything” is an excellent piece of work.  Blank, Eric Ries, Alexander Osterwalder are three of the front-runners in the lean startup movement. For years they’ve been working to develop new tools and new ideas for building better startups.  Steve Blank shares his own reflections in When hell froze over.

Today, Elisbeth and I are developing Strategy Tools for the Next Generation. We firmly believe we need new strategy tools for the future.The next generation of leaders, entrepreneurs, risk takers and pirates need new tools to master strategic innovation.We’re also fortunate to  be a part of a larger movement in Norway, around the Startup Weekeend. A fantastic event, network and startup energizer.

Tonight we jump on the plane to Berlin for the Business Design Summit where 250 visionary leaders come together to share, learn and develop the next series of hands-on, business tool.

None of this, of course, will change anything for NST. But our ambition is helping the future entreprenuers, risk takers and pirates develop wildly successful start-ups or internal ventures. To do this, we need radically different tools than the SWOT, The PESTEL and Porter’s.

They exist. And you can start by reading the most recent HBR issue.

Sneak preview: We’re heading back to Cannes and the World Innovation Convention! Workshop on ”Your Innovation Toolkit”

Last november, we had the sincere pleasure of running “The Innovation Pyramid” workshop at the World Innovation Convention in Cannes.

Last week we got the invitation to come back. We’re stoked. This November, we’ll run “Your Innovation Toolkit” and present the global mix pf participants with a series of powerful innovation tools they can put to work in their own organization.

The Strategic Innovation Canvas and Three Levels of Business Models are two of the tools we’ll present.

For now, catch up on this fantastic innovation event at World Innovation Convention 2013.

About the World Innovation Convention

The World Innovation Convention in picturesque Cannes is the most popular and pioneering platform for global innovators who particularly join to collaborate with their industry peers, and proven experts for 3 action packed days.

For the third time, Startup Weekend Stavanger was a fantastic event. Energy, creativity, ideas and – most importantly – making amazing  stuff happen. Kudos to the whole organizing team and the fantastic group of participants, mentors, judges and supporters!

Join the Facebook Group here and see the action.

Some of the ideas turned companies this weekend:

This blogpost shares a discussion following our Sparking Strategic Innovation Workshop in Copenhagen this March.
It shows how we are constantly learning, developing and expanding our understanding of the various strategy and innovation tools once we put them into the field.

Hi again,
It’s great to hear from you.
I hope you and your family had a great eastern. Here it was sunshine all around.

Thanks also for your helpful comments. This is much appreciated.

It’s fantastic to hear you’ve used several of the tools already. Experiement and learn, that’s much to our liking 🙂

You also touch on something that is right on the top of our plate; the how-to use guides for each tool. It’s something we are busy at work on these days. For what it’s worth, here’s a few pointers from our side.

Change ladder (Change stairs)
Most of the classic literature on change managemenet is “change is difficult”. But, there’s also a substansial body of knowledge around the ”positive sides of change”. Problem is, few executives and managers are trained in this aspect. This tool highlights the various phases of change; toward the positive, or towards the negative and opens up for the facilitation of ”how to drive engagement towards the positive sides of change?”. Or more simply; “How might we make change fun”?

Spider Web (or A Holistic View on Innovation; in search for a better name…..)
This innovation mapping tool is gaining more and more traction in large, diverse groups within the same company to get a shared understanding of the company’s innovation capabilities. It can be used in multiple ways:
– One-to-one coaching
Great for reflection and discussion.

– Large group interventions
Indidvidual profiling, then sticking the posters to the wall.
Recently ran a workshop in this with Aker Solutions Leadership Forum with great results.
Opens up excellent discussions on our company’s strenghts and weaknesses in the area of innovation capability.

– Employee survey
The 18 items can be set up as a analytical tool, through an online, employee survey. This works well to get a significant data set, for analysis. yet, it does not provide the action we sorely need to drive innovation capabilities. So far, we have not used this tool in this manner, but it’s easy to set up and design.

The Action Road Map has three categories,
– Easy: can get done by Monday
– Impact: will have powerful effect! Wow!
– Fun: this would be so much fun to do

This design allows for a balance in the execution portfolio. It also forces groups to balance “right now! completed by Monday”, with the more long-term aspects. The fun part is, well, just fun. But hence also more likely to have a long-term positive influence on the group and group dynamics itself. Celebrate this last one wildly!

I hope these comments where useful.
We are working on expanding this ”how-to” text online.

Let us hear what you think about these inital comments.

Keep up the Experiment & Learn mind-set.